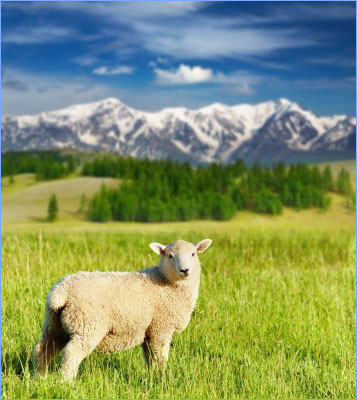 Feta is prepared either in small cheese dairies where traditional methods are applied, or in large industrial units that respect the traditional making of authentic feta. In both cases, as feta is far from being simple to produce, one can say that is an artisan cheese.
As it is expected, the largest part of feta quantities (for export and for domestic consumption) is produced in modern industrial units. This comes from the need to minimize the production cost and to improve product quality.
Towards this direction, the production method is as follow:
Feta is made primarily from sheep's milk or a mixture of sheep and goat milk (maximum 30% goat's milk). Milk is collected by producers and brought to the cheese dairy in large kegs. The milk coagulation has to occur within 2 days from its collection.
Traditionally feta was made with unpasteurized milk however industrial diaries now use pasteurized milk due to concerns over public health and export regulations.
The milk is pasteurized at a minimum of 72 C for 15 seconds or any equivalent time-temperature combination. 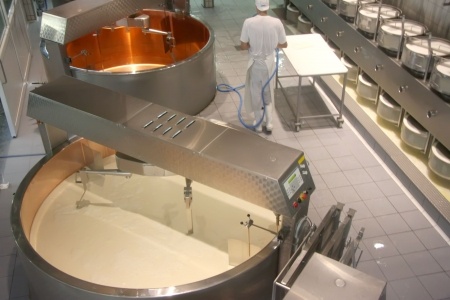 The use of pasteurized milk necessitates the use of lactic acid starter cultures and calcium chloride to help achieve the right taste profile. These are added after pasteurization as the milk is being held at 34-36 C. These are the only additives allowed in feta production. After the milk has been refrigerated for 20 minutes enough rennet is added to coagulate the milk. After coagulation the curds are cut in small cubes and left for 10 minutes.
Following this they are transported into molds, which favor draining and shaping of small cuts. The filled molds are stored at 16-18 C for 18 up to 24 hours and turned periodically to ensure even drainage occurs and that all the curds are subject to equal amounts of pressure.
After drainage the cheese is taken from the molds and placed temporarily either in wooden barrels or metal containers, where it is salted in layers, so that final concentration of salt in the mass of cheese is roughly 3%.
Once the cheese has been salted it is matured for 14 - 20 days in brine. This part of the process takes place in rooms at 16-18 C, with high relative humidity. At this point the cheese will have humidity less than 56% and pH 4.4 - 4.6. After this the second maturation takes place. For two months the feta is kept refrigerated in its brine at 1-4 C.