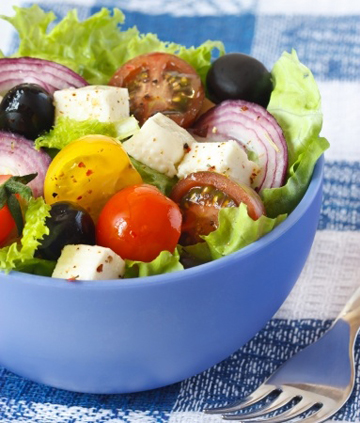 The world famous Greek Salad (known as 'Horiatiki' in Greece) makes up a main part of a traditional Greek meal, which makes use of the wide variety of home-grown produce.
Though each region of Greece has its own version of the salad, its basic ingredients are common.First of all, it is needed a comprehensive amount of Extra virgin olive oil, the cornerstone of the Greek Salad. In order to make a good and healthy Greek Salad, we need to use also feta, fresh tomatoes, cucumbers, onions, olives (preferably Kalamata olives), peppers, and an amount of herbs.
Greek Salad it's a perfect starter - or whole meal for some people - all year long.Since increasingly big amounts of experts and researchers embrace the Mediterranean Diet as a healthy nutritional lifestyle and as Greek salad contains some of the most important ingredients of the so-called 'Mediterranean Diet Pyramid', one can say that Greek salad is the focal point of the Mediterranean Diet.
Greek Salad can be found on menus in Greek restaurants both internationally and within Greece itself.
As it is expected, it is country's most popular salad.

Greek Salad Recipe (4 persons)
2 tomatoes (medium to big)
2 cucumbers
200 gr feta cheese (whole or in cubes)
1 green pepper
1 red pepper
1 small onion
8-10 Kalamata Olives
2 Tbsp Greek Extra Virgin Olive Oil
Oregano
Salt
Cut in normal pieces all of the vegetables and add the Olive Oil and a little bit of salt. (Do not overdo it with salt, there is the feta cheese too) Mix them well. Add the feta cheese and the Kalamata Olives. Drizzle with a little bit of extra virgin olive oil, and add a pinch of oregano. Ready to serve!