A few words about Feta cheese

The world famous Feta tops of the list of Greek cheeses. A genuine Greek product, it is believed to be the oldest cheese type in the world. Made from sheep's milk or a mixture of sheep and goat milk has a unique distinctive salty bite, a fresh acidity of taste, and a rich aroma.
Classified by the European Commission as a 'Protected Designation of Origin' (P.D.O.) product, feta is quite distinct. As a genuine Greek product, has won a worldwide recognition for its quality. 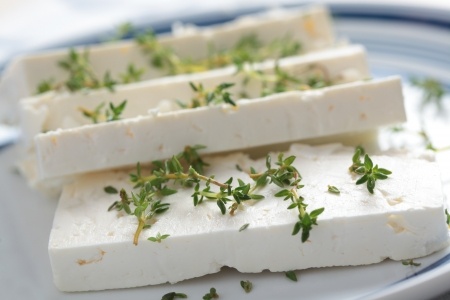 It is a soft brined white cheese with no skin, with small holes and a compact touch, with few cuts, traditionally made in Greece. Feta has a unique distinctive salty bite, a fresh acidity of taste, and a rich aroma.
According to the Greek legislation ('Code of Foods'), feta is produced either from sheep milk or a mixture of sheep and goat milk, in the regions of Macedonia, Thrace, Epirus, Thessaly, Sterea Ellas, Peloponnese and Lesvos.
Before being available for consumption, it must be allowed to mature for at least two months in traditional wooden barrels or metal containers, covered in brine. This is necessary, in order the whole of its organic and qualitative characteristics to be developed.

Authentic feta is quite distinct. It is made primarily from sheep's milk or a mixture of sheep and goat milk (maximum 30% goat's milk). The sheep and goat races used to produce feta have adapted to the mountainous terrain of the feta producing regions and their diet is based on the rich local flora.
Though feta belongs to the soft cheese category, it is also highly regarded for its variations, as it can range from soft to semi-hard, and mild to sharp. These variations are a result of the amount of goat's milk added as well as the culture used and the methods employed in the early curing phases.
In Greece, feta is prepared either in small cheese dairies where traditional methods are applied, or in large industrial units that respect the traditional making of authentic feta. In both cases, as feta is far from being simple to produce, one can say that is an artisan cheese.
100,000 tons of feta are produced in annual basis in Greece. Not surprisingly, feta is the most consumed cheese in the country.
It is used as a table cheese, as well as in salads, baked goods, casseroles, appetizers, and pastries.
With its centuries-old heritage, this rich cheese has long been a staple in Greece, but is now enjoyed worldwide.
Feta is classified by the European Commission as a 'Protected Designation of Origin' (P.D.O.) product.
Tasty and nutritious, feta has won a worldwide recognition for its quality and has conquered Greek and international markets.